Wilma was Wally's girlfriend. She was a short-lived Wally character, only appearing in two books (The Ultimate Fun Book and The Magnificent Poster Book). She was the original owner of Woof the dog.

Like Waldo, Wilma wrote postcards. They were often to the reader or Wally, and were sent with her own photo-stamp (similar to Waldo). She introduced herself in The Ultimate Fun book saying:

...My name is Wilma and from now on I'm going wherever you go. Just for fun, of course! Have you noticed me yet, have you spotted me in the crowd?...And have you met my dog Woof? Oh wow, actually where is he?... 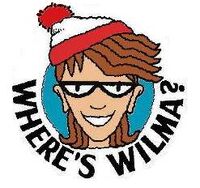 Wally falls for Wilma in The Ultimate Fun Book, and the two express their feelings towards each other in their postcards. In one scene, a love struck Waldo is seen fainting after Wilma walks by (complete with a pink heart floating around his head). The back of the book introduces the character of Wilma saying "...and for the first time on the printed page...Wally's girlfriend WILMA!"

Here are just a selection love messages found in their postcards:

"Everthing's going swimmingly well between Wilma and me..." - Wally

"Incredible! Fantastic! Get this! Is it real? Badboom goes my heart at the thought of Wilma..." - Wally

"There are no two ways about it, Mr. Wally - you have changed my life in the most amazing fashion." - Wilma

"(And Wally, I just thought of another name for you: Mr. Wally Walking-Stick, Ha ha ha!)" - Wilma

Wilma would refer to Wally with fun and joking names. These include:

Add a photo to this gallery
Retrieved from "https://waldo.fandom.com/wiki/Wilma?oldid=7096"
Community content is available under CC-BY-SA unless otherwise noted.