Where's Waldo? is the title of the first Waldo book. Released in 1987, the book was the result of more than two-years of detailed work by illustrator Martin Handford.

Where's Wally? introduces readers to Wally, a distinctively dressed man, as he sets off on "a world-wide hike". Waldo travels to everyday places – such as the beach, the ski slopes and the zoo. The book features 12 detailed 2-page illustrated spreads of the different locations. Somewhere amid the crowded scene is Waldo and readers are asked to scour the detailed illustrations to locate the lost traveler. Each scene is accompanied by a postcard to the reader from Waldo, who introduces the scene and comments on his travels. 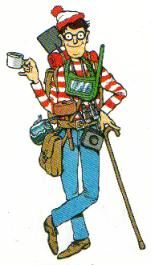 Waldo sets out on his journey equipped with 12 items to help him on his travels. He carries a walking stick, kettle, mallet, cup, backpack, sleeping bag, binoculars, camera, snorkel, belt, bag and shovel. As Waldo journeys from location to location he loses one of these item, and asks the reader to locate the object left behind in each scene as well.

At the end of the book there is a collection of check-lists of other things to find in each spread. Readers are asked to go back to the beginning and re-explore each scene locating other objects, gags and people in each picture.

Where's Waldo? was re-released in 1997 in an updated "special edition" version to celebrate the 10th anniversary of the inital publication. The special edition relocated Waldo in each scene, updated various items and inserted new characters to spot – including Woof, Wenda, Wizard Whitebeard, Odlaw and the Waldo Watchers. This version has since become the standard 2nd edition version – replacing the original first edition in book stores and subsequent releases.

The "On The Beach" scene was re-released as a poster in The Magnificent Poster Book!. New characters, such as Wenda and Wizard Whitebeard, were inserted into the image for the poster along with other minor changes to scene.

In the early part of the 1980s Martin Handford was working as a freelance illustrator, specializing in drawing crowd scenes. After seeing some of Handford's artwork, David Bennett, a business associate and an art director at Walker Books in England, contacted the artist about developing a children's book showcasing his singular talent. It was only then that the character Waldo was conceived. Waldo was created to provide a link between each crowd scene and provide a focus and purpose for the book. Handford explained in a 1990 interview that "a book full of crowd scenes has no central theme, but adding a wacky character for the reader to look for adds a purpose to each page. That's who Waldo is - an afterthought." [1]

Handford first began working on the book in 1985. Handford illustrated each the 12 scenes for the book - working at time for more than eight weeks to create just one of the two-page Waldo spreads. David Lloyd, a Walker Books editor, helped Handford polish the minimal, yet nessesary, text found in the postcards throughout the book. Handford insists there is no science behind where Waldo was hidden in each page. He says that as he would work his way through a picture, and simply add Waldo when he came to what he felt was "a good place to include him".[2]

When Handford first designed his leading man, he named him Wally - a shortened formed of Walter or Wallace but commonly used in Britain as a slang term for a somewhat spacey person. However the American publishers of the books felt the name would not resonate with the North American readers; so when the book was finally published there in 1987, the character was renamed Waldo (different name changes worldwide were made in other countries, such as Charlie for France and Walter for Germany, see the table below). [3]

Despite being "an afterthought" to tie Handford's illustrations together, the public responded to the character of Waldo. Handford stated "as it turns out, the fans were more interested in the character than in the crowd scenes."[1] The success of the book and character led to more than 7 subsequent Waldo book by Handford - along with numerous additional publications, an animated television show, an internationally syndicated comic strip and countless other merchandise and spin-off productions.

After two years of development, the book was finally released in September 1987. However Handford did not sit on his laurels after the book hit stores. A follow-up book, Find Waldo Now, was released less than a year later in September 1988.

Waldo in other countries

As said, Wally was changed to Waldo for the North American releases. His name was also changed in many other countries outside of Britain, though in several cases the name Wally was retained.

Over time more characters were added to find in each scene:

Where's Waldo? spent more than 93 weeks in the number one spot on the New York Times Best Sellers List [4].

Retrieved from "https://waldo.fandom.com/wiki/Where%27s_Waldo%3F?oldid=7194"
Community content is available under CC-BY-SA unless otherwise noted.