A series of six Where's Waldo? bendable action figures were produced by Mattel Toys in 1991 . The figures, each sold separately, featured different characters from the Waldo franchise with "clip and grip action" and assorted accessories.

Three figures were of the central recurring Waldo characters - Waldo, Wenda and Wizard Whitebeard. A Woof figure was included as an accessory with both the Waldo and Wenda figure. The remaining three figures were of distinguished characters from past Waldo adventures – namely the book Find Waldo Now. These figures included a Norseman (from "On Tour with the Vikings"), a crusader (from "The End of the Crusades") and a pirate (from "Being a Pirate"). 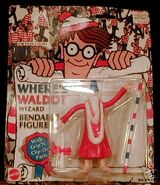 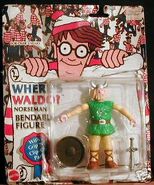 Add a photo to this gallery
Retrieved from "https://waldo.fandom.com/wiki/Bendable_figures?oldid=4779"
Community content is available under CC-BY-SA unless otherwise noted.